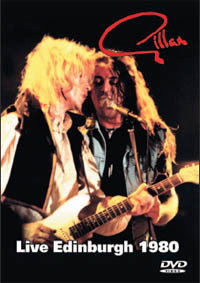 3. If You Believe Me

7. Smoke On The Water

8. Sleeping On The Job

2. In depth interviews with JOHN McCOY,

3. History of GILLAN by Joe Geesin

This is 1980 and it is the band GILLAN's year. The album "Glory Road" entered the UK charts at Number 3 and they had just returned from the USA from doing what they did best - playing live.

The concert footage on this DVD was performed for and filmed by Scottish TV (STV) to an audience whom Gillan had eating out of their hands by the end of their performance.

Classic Rock from Gillan - in their prime.