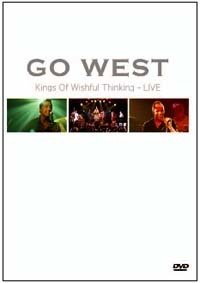 6. ALL DAY ALL NIGHT

17. THE KING OF WISHFUL THINKING

GO WEST-PETER COX and RICHARD DRUMMIE. Between 1985 and 1993 they notched up in the UK alone 13 Hit singles as well as Hit albums "Go West" and "Bangs And Crashes". The band is, to this day centred around the song writing partnership of vocalist Peter Cox and multi-instrumentalist Richard Drummie.

During Winter 2003 a sell out concert by GO WEST was recorded especially for DVD release and features no less than 10 of their Hit Singles as well as a new track "Glow" with a bonus feature on the DVD of "Glow-Exclusive Preview" with Peter and Richard being filmed in the studio whilst recording the song.