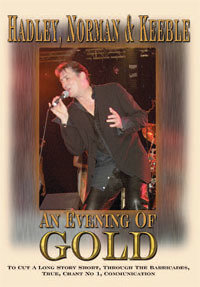 HADLEY,NORMAN & KEEBLE - An Evening Of Gold


TONY HADLEY, STEVE NORMAN and JOHN KEEBLE shot to fame as SPANDAU BALLET with the Kemp brothers in the early 80's and led the "New Romantics" movement in the UK.

Hit single after Hit single followed and whilst "True" was number 1 in the singles chart during 1983 the band embarked on a "Spandau Ballet Over Britain" tour. This set the scene for Hadley, Norman & Keeble as playing live was what the core of the band was all about.

In depth interviews with HADLEY,NORMAN & KEEBLE

History of the band

Interviews with fans at Pennington's