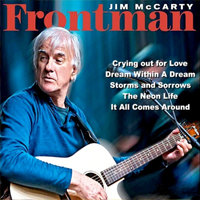 TRACKLISTING
1. Crying Out For Love

2. Dream Within a Dream

5. It All Comes Around

James McCarty was one of the founding members of one of the seminal British Invasion groups, the Yardbirds. After leaving the group, he formed the progressive rock outfit Renaissance with Yardbirds vocalist Keith Relf. McCarty left Renaissance in 1973; he wrote material for Dave Berry and Dave Clark, among others, before attempting to re-form Renaissance in 1976. Sadly, the band's plans were destroyed by Relf's death in 1976; the group continued as Illusion. In 1983, he joined former Yardbirds Chris Dreja and Paul Samwell-Smith as Box of Frogs. In the late '80s, McCarty launched his own solo career, which has produced four albums that meld his blues-rock heritage with new age philosophies and musical textures.