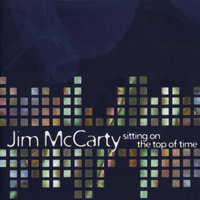 JIM McCARTY - Sitting On The Top Of Time

2. Blowing Through the Countryside

3. Living From the Inside Out

9. Calling Out To You

10. Sitting on the Top of Time

The beautiful latest album from Yardbirds and Renaissance founder member and only his second solo release.

Recorded in Canada, the album is the end result of several years of studio sessions recorded in Toronto during gaps in YARDBIRDS' tours. Canadian flautist Ton Korb plays a major role both as performer and behind the scenes, melding his gentle varied woodwinds to the soft rock sound already established by McCarty.

The music is reminiscent of early RENAISSANCE and ILLUSION, with acoustic guitars and pianos often forming the base, and a fantastic rhythm section more than ready to fill in when needed. Flutes and the occasional cello and other orchestration impart additional delicacy - a caring reverence is imparted in every note and vocal breath.

An exquisite album, also featuring Steve Hackett on guitar.
Save this product for later
Display prices in: GBP