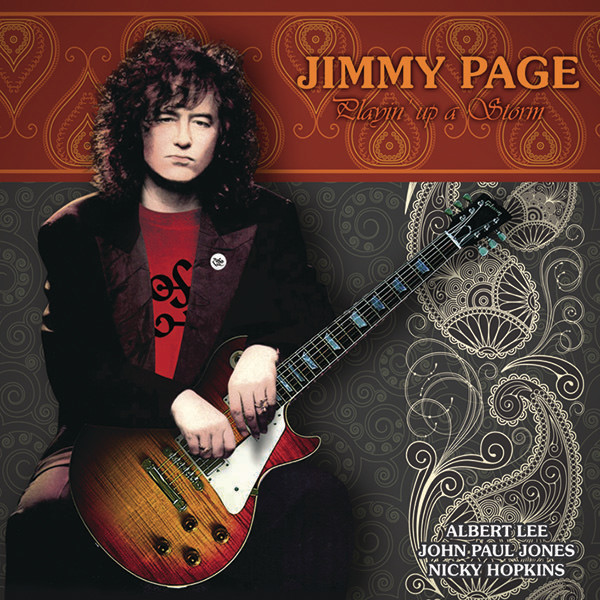 Jimmy Page - Playin' Up A Storm

Sleeve Notes:
Before the name Jimmy Page became synonymous with Led Zeppelin and hard rock guitar, the guitarist was a much sought-after session player, appearing on an assortment of artists' recordings. Some were well known (the Kinks, the Who, Joe Cocker), others somewhat more obscure, such as this rare album with vocalist Keith De Groot, which additionally features half a dozen of the cream of the crop of British studio musicians, including future Led Zeppelin bass player John Paul Jones, and Nicky Hopkins, later often found tickling the ivories in the company of the Rolling Stones.
Jimmy touched upon a variety of musical styles throughout his career, and these fourteen tracks- which he also co-produced- can be effectively placed in the 1960s rock genre. The amps are not yet overdriven and cranked up to eleven, but you do get a glimpse into Page's imposing work as a "hired gun" playing catchy tunes and memorable riffs. Page's solo on "Burn Up" for example is a true gem - right up there with his solo on Joe Cocker's version of "Blackbird".
Guitarist Albert Lee, the other great "axe man" on this album, spent the mid-'60s as a top R&B guitarist in England, but reinvented himself in the 70s as one of the most excellent rockabilly and country pickers in the world, subsequently becoming one of the most in-demand session players in Nashville and Los Angeles. He also spent many years playing alongside the Everly Brothers, Emmylou Harris and Eric Clapton. The album includes renditions of blues classics like "Lovin' Up A Storm", "Think It Over" and "Burn Up", along with covers of Roy Orbison's "Down The Line" and Carl Perkins' "Dixie Fried".
These recordings are a wonderful presentation of Jimmy Page and Albert Lee's development as two of the world's most impressive guitarists, and are well worth a listen to by anybody that admires their fretwork. The rhythm section; John Paul Jones & Clem Cattini, along pianist Nicky Hopkins and the rest of the gang, are rock solid in their support of Jimmy and Albert and seem to be having a blast- Indeed everybody's "Playin' Up A Storm".