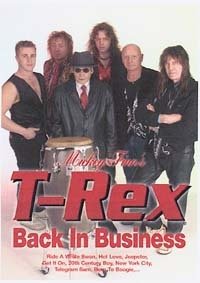 MICKEY FINN's T-REX - Back In Business

I Love To Boogie

Children Of The Revolution

Back in the autumn of 1997 original T-Rex members Mickey Finn and Paul Fenton were invited to appear at a specially organised show in Cambridge to commemorate the 20th Anniversary of Marc Bolan's untimely death. When Mickey, Paul and Marc's son Rolan appeared on stage the audience went wild. A decision to reform T-Rex was inevitable. Rehearsals were arranged and four new members were carefully chosen to complete the line-up.

Mickey Finn had been with Marc since Tyrannosaurus Rex and had brought a 'be-bop' approach to the music. Paul Fenton had joined the band in 1973 after it had become T-Rex. They were joined by Alan Silson who had been in Smokie, Rob Benson, a lifelong fan who now had the job he had always dreamed of - singing alongside his heroes, and two experienced musicians Dave Major and Tony Allday.

'Back In Business' was recorded during the autumn of 2001 in Kent, England and produced and directed by Barry Newby.
Save this product for later
Display prices in: GBP