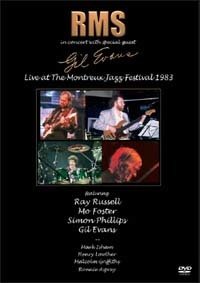 3. The Whole Of Tomorrow

The Convergence-the story behind the concert

RAY RUSSELL, MO FOSTER, and SIMON PHILLIPS aka RMS flew in from London and GIL EVANS flew in from New York. Montreux looked beautiful. That evening, further inspired by the beautiful music of Herbie Hancock who preceded them on stage - the band played a wide ranging collection of titles, running from the gamut of HENDRIX to GERSHWIN. Everyone had a ball. And, as the final chord of "Gone" died away, Gil shook his clasped hands above his head-boxer like-his familiar gesture: "we got there".

RMS - Ray Russell, Mo Foster and Simon Phillips - three musicians who know that the only true accolade is the admiration of one's peers. Whether in the studio or live they have, between them,worked with major artists as diverse as JEFF BECK, GIL EVANS, STANLEY CLARKE, WHO, TINA TURNER, PHIL COLLINS, JACK BRUCE, GERRY RAFFERTY, CAT STEVENS, JOAN ARMATRADING and GEORGIE FAME