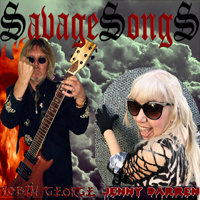 7. Castles In The Sky

World renowned guitarist, singer and songwriter ROBIN GEORGE has teamed up with vocalist JENNY DARREN who had the distinction of being labelled a "raunchy rock chick" and has in the past supported AC/DC, STREETWALKER and PATTI SMITH on tour to name just a few.

All the songs on this album are written by Robin and Jenny adds her distinctive powerful vocals to some blistering guitars and great musicianship from musicians that includes ex members of Climax Blues Band and King Crimson.