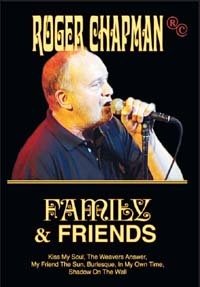 3. Habits Of A Lifetime

9. My Friend The Sun

1. In depth interview with ROGER CHAPMAN

ROGER CHAPMAN shot to fame as lead singer/songwriter with FAMILY in the late 60's/early 70's notching up TOP 10 Hit singles and albums . Now Roger Maxwell Chapman will be 60 years old this year and there is perhaps no better time to reflect on his burgeoning back catalogue.

In co-operation with the Mystic Audio release Angel Air Waves filmed Roger in concert at a sold out Newcastle Opera House during the opening leg of his UK tour in the autumn of 2002. His Band SHORT LIST support Roger as he trawls through his enormously popular catalogue and provides over 2 hours of classic rock sung and played the "Chappo" way.