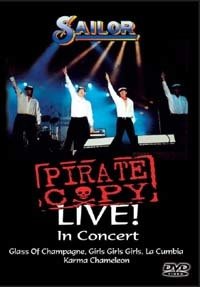 2. One Drink Too Many

3. Blame it on the Soft Spot

18. A Glass of Champagne (Reprise)

1. Band Documentary with in depth

interviews with all band members

SAILOR was signed to Epic records (part of CBS) during 1974 and they quickly experienced chart success in Holland with "Traffic Jam". In the UK "Glass Of Champagne" made no 2 in the charts during 1975 with "Girls, Girls, Girls" making Top 10 in the UK during 1976 and further single chart success during 1977 with "One Drink Too Many".

Singles success was a very small part of what Sailor were about as they also had hit albums such as "Trouble" coupled with their live reputation but by 1980's release of the album "Dressed For Drowning" the band called it a day. PHIL PICKETT then joined CULTURE CLUB and co writing one of the biggest and most popular hit's of the 80's "Kama Chameleon". The Sailor story did not bite the dust there as in 1989 BMG Records in Germany approached the band to record some new tracks which became sizeable hits all over Europe "The Secretary,La Cumbia". A new album Streetlamp" was also recorded.

In 1993 the band reformed for touring and at the huge Waldbuhne Stadium in Berlin they played to over 25,000 fans. This was quickly followed in 1994 with a "Greatest Hits" release from Epic Records.

Now in the 21st Century and their 4th illustrious decade, Sailor still surprise, entertain and enthral audiences with their incomparable style of powerful music and theatrical entertainment recorded at The Swan Theatre, High Wycombe, UK during November 2002 to a sell out audience.
Save this product for later
Display prices in: GBP