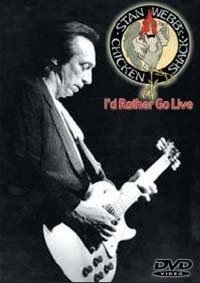 3. The Thrill Has Gone

6. You Are The Sweetest Little Thing/Hurt

11. The Daughter Of The Hillside

During the summer of 2004, CHICKEN SHACK enthralled a packed audience at a venue in the south of England where this DVD concert footage was filmed. STAN WEBB and Chicken Shack performed their hits live and more. The "more" includes songs from Stan's solo albums.

Chicken Shack first entered the UK charts in 1969 with "I'd Rather Go Blind" and had a number of Top 40 chart albums. This DVD shows them at their best-playing live and whilst the Hit singles may have diminished the performances of the band continue to entertain and enthral their audiences all over Europe.

This DVD is over 2 hours in length and includes tracks from the band as well as bonus features of interview with Stan Webb and Band History/Discography.