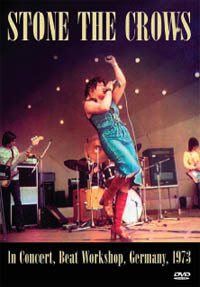 6. Palace Of The King

History of STONE THE CROWS by RICH WILSON

Suitably impressed, he signed them but had a name change in mind and they were renamed STONE THE CROWS. Even though their original guitarist Leslie Harvey had been electrocuted during a sound check at The Swansea Ballroom in 1972 they had regrouped with JIMMY McCULLOCH playing guitar and were at a creative and performance peak when this concert was recorded in Germany during 1973.

Now released for the first time ever on DVD.