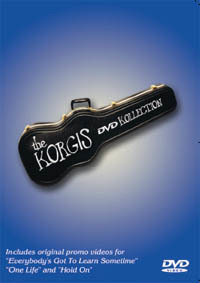 THE KORGIS - The Korgis DVD Kollection

4. I wonder What's Become Of You

5. That's What Friends Are For

8. All The Love In The World

9. Everybody's Got To Learn Sometime

11. This World's For Everyone

-the story of The Korgis-documentary

The KORGIS hit the big time with their worldwide Hit "Everybody's Got To Learn Sometime" which had followed hard on the heals of their very first Hit Single "If I Had You".

This first ever Korgis DVD is a mixture of stunning live sessions recorded in 2005 as well as original promo videos rounded of with interviews with all band members to create the "Off The Leash" Korgis documentary which delves into membership of Stackridge as well as Andy's time with Tears For Fears, James recording session at Abbey Road with George Martin and John's performance on the Tears For Fears album "Elemental".

JAMES WARREN, ANDY DAVIS and JOHN BAKER
Save this product for later
Display prices in: GBP