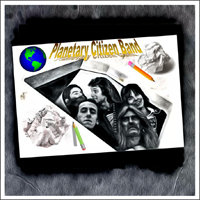 Local Chicago percussionist Paul "Where's P-Zed" Zalud on congas joined with Bob Lizik on bass (20 years now with Brian Wilson of The Beach Boys), to round out the project.

The name comes from an organization affiliated with The United Nations called 'Planetary Citizens'. At the time, Joe was a proud holder of a Planetary Passport. The song was written, arranged, & produced by Joe Jammer with Gary Loizo (producer/ engineer of Styx, and president of the Grammys for seven years) as engineer. It was recorded at Gary's much beloved Pumpkin Studios on the south-west side of Chicago.

After all�"We Are All Planetary Citizens!"
Save this product for later
Display prices in: GBP