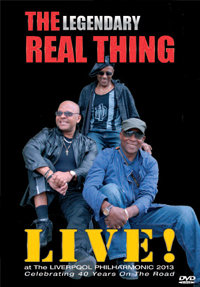 THE REAL THING - Live At The Liverpool Philharmonic 2013 DVD

3. Raining Through My Sunshine

4. Whenever You Want My Love

5. You'll Never Know What You're Missing

6. Can't Get By Without You

-Children Of the Ghetto

16. You To Me Are Everything

17. Can You Feel The Force
BONUS TRACKS

THE REAL THING are a UK soul band formed in the 70's who, in addition to achieving a string of UK hits, also charted internationally with their song "You To Me Are Everything" which reached No 1 (1976) in the UK and Top 30 Billboard in USA.The follow up track "Can't Get By Without You" reached number 2 in the UK chart (1976) and over the next decade they achieved eight UK hits including "Can You Feel The Force" (1978).

MOJO writer/journalist Paul Du Noyer credited them with restoring "Liverpool's musical reputation in the 1970s with their success" and by sales in the '70s they were the most successful black rock/soul act in the UK.

Performing to a packed out Liverpool Philharmonic in 2013 the band celebrated their achievements over the past 40 years in style.