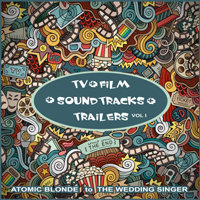 1. "Der Kommissar" AFTER THE FIRE

- taken from "Guardians Of The Galaxy 2" Trailer

- taken from film "Because Of Gracia"

- taken from film "Enter The Dragon"

8. "Stop Look At Me" CONSORTIUM

- taken from film "And Now"

11. "Something Else" The SILENCE

- from TV series "The Good Guys"

15. "Everybody's Got To Learn Sometime" The KORGIS

- taken from "The Wedding Singer"

A little known part of Angel Air's business is its Licensing activities and our placement of tracks in Films and TV shows the world over.

"Atomic Blonde to The Wedding Singer" is a compilation of tracks which have featured as soundtracks to drama and a great introduction to the six thousand plus audio tracks that Angel Air controls.